No, I'm not going to fantasize about 'My Dream House,' though that would be tons of fun. Maybe tomorrow. TODAY I'm going to talk about a house that I continually dream about. Perhaps together we can do a little analysis.

The dream started maybe a year or two ago. It's been with me in various forms for longer than that, but only recently has it solidified (as much as a dream can) into something I'd file under "recurring." Certain details change, but the layout of the house in my dreams is usually immutable. The dream often begins with me realizing/remembering that I live in a two-story house. I've forgotten/never knew about the lower level, which is a partially finished basement divided into two halves. Each half has its own storeroom. 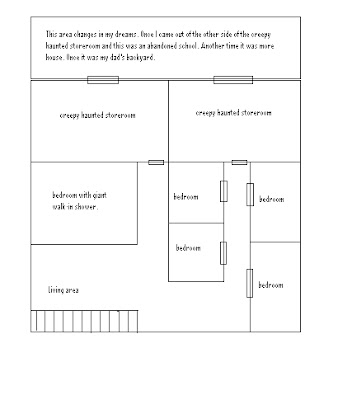 When I realize that my house has a lower level, I always explore it even though I know it's going to scare me. The bedrooms are always nicely appointed and look as though someone has been living in them. Sometimes I feel like I have been living there, or at least using the bedrooms to store my stuff. The living area is totally lined with bookshelves. In one of the bedrooms there is a gigantic open shower, the kind that someone who uses a wheelchair would have.

When I go into the storeroom, I know there is something there. I've never seen it or run from it, but I feel it. It's disappointing, I think in my dream, because I just remembered all of these rooms and now I can't use them. I'm always either cleaning or packing this space, getting ready for a visitor or a move.

Sometimes I wonder, "How am I affording to live in this giant space?" Sometimes I think that even my landlord doesn't know it's there. Sometimes there are people living there, other times the entire lower level is empty.

So what does all of this mean? A Google search turned up some similar dreams that others have had. People suggest that it could mean you feel an emptiness in your personal life (YAH. Now more than ever) or that you are missing love. That actually makes a lot of sense. It probably explains the housekeeping, too. I need to straighten things out in my personal life. Could it really be that simple? What about the haunted mirror-image rooms? What's hiding in there?
Posted by Girlfriend in Progress at 1:39 PM 1 comment: