In anticipation of the three year anniversary of my boyfriend's and my first date, I thought it would be fun to read the tidbits of recorded history from that time. In other words, the gushingly girly emails I wrote to my friends. Oh my god, was it not fun.

I read and read and by the end of the narrative was depressed, and pitied the heroine for being so lovesick and foolish. She was head-over-heels. She was making emotional mix CDs at a rate never before seen. She was hanging on every text, call, and glance from him. She was, quite frankly, a little bit pathetic. When I finished reading, it took me a moment to snap back into reality and realize, "That awful creature was me." *barf*

It took even longer to remember that I had ultimately gotten what I'd wanted so badly years ago. There's not much comfort to be taken in that, though, because that lame girl is still in there somewhere, just waiting to pop out. When she does I'm going to remind her that one CD is plenty.

Update: Just did a little research into what kind of gifts are traditional for a three year anniversary and apparently it is the 'Leather Anniversary.' So, what does that mean? Like, shoes? Or whips and ball gags and things? Fair enough...
Posted by Girlfriend in Progress at 12:17 PM No comments:

OK, so I'm a little bit obsessed with Say Yes to the Dress. Not so much because I have any plans to marry, but because I've been fantasizing about and sketching dresses of all kinds since I was knee-high to a flower girl. I love the fashion, love the drama of everyone throwing in her opinion on the brides' choices, and I especially love when the stylists "jack up" the girls with veils and jewelry once they've found The One. It's all very satisfying, and it makes me want to go shopping. (I'll admit that I've even gone to Kleinfeld's website and browsed. Also very satisfying. I like either art nouveau-themed dresses, or the superduper modern ones with asymmetry and pockets.)

A few nights ago I caught a new (I think) episode featuring a couple who seemed to be so ridiculously in love. When they were shown at their wedding, the bride asked the groom if she liked her dress and he said:

"As long as you're wearing it, I like it."
Um...hashtag MELT. What a beautiful thing to say to your new wife, or anyone you're in love with, for that matter. It's just such a wonderful attitude to have towards your partner. To really believe that she could be wearing a dress made of masking tape or a Slim Goodbody outfit and still look amazing.
Even if it's not entirely true, I'd suggest learning this line and pulling it out in the future. It'll probably get you a, "Yesssss."
Posted by Girlfriend in Progress at 11:33 AM No comments:

Labels: advice, fashion, it's for your own good

This is a bit of a shameless plug for the book I'm reading right now, but if you want to gain some insight into the long-term potential of your relationship (or insight into a lot of things, really) you should pick up Blink by Malcolm Gladwell. It delves into the instant judgments we're capable of making and how those gut reactions can sometimes be more accurate than judgments made after months of study.

In the first chapter, Gladwell recounts an experiment performed to determine if the success of a marriage can be predicted. They filmed couples discussing their marital issues and analyzed the emotions they displayed. Turns out the designers of the study were able to guess with about 90% accuracy whether the relationships were doomed or not, just based on the ratio of negative interactions to positive. Is that not amazing?

Apparently the number one indicator of a relationship that isn't going to last is the presence of contempt during those conversations. Feeling contempt from the person you love doesn't just affect your heart, but it can lead to more frequent illnesses (!) and less happiness in all areas of life. To me, this makes so much sense. If my boyfriend is upset with me; if we get to the point that we're being mean or calling names, it guts me and makes it nearly impossible to focus on anything other than those negative emotions.

So if you're approaching the point in a conversation or conflict where contempt may enter the equation, step back. They say, "Sticks and stones," and all that, but unkind words from your SO can physically hurt you. And, at the very least, they point toward a predictably grim future for you, as a couple.
Posted by Girlfriend in Progress at 10:26 AM No comments:

Just a Spoonful of Sugar 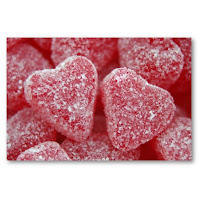 I'm going to write a little open letter to the guys right now, because I look at you and I see the confusion and helplessness in your eyes. You're trying so hard to figure out what's happening in these crazy, feminine heads of ours. You're nervous and desperate and kind of want to bolt, like a startled animal. I see all this, and I want to help, so I'm going to let you in on a little secret that I promise will serve you well in your relationships. In this case, we're talking about romance, which is a word that scares the hell out of you guys, but it really shouldn't, because...

Read more »
Posted by Girlfriend in Progress at 11:21 AM No comments: