Wearing your heart on your sleeve

Last week I had a bit of a nervous breakdown. In retrospect it wasn’t really a nervous breakdown, it was just a prelude to a physical illness – which I should have recognized – combined with a bad case of PMS, but at the time I was freaking out.

Let me explain: it was a Sunday afternoon and I was supposed to head over to a friend’s house to grill. I got up and wasn’t feeling…entirely myself. I felt snippy and cross but chalked it up to not getting enough sleep. I chatted with my friend, made some firm plans, hopped in the shower and then proceeded to get dressed. I wasn’t wild about my outfit so I changed. Then changed again. Then changed again. And on and on until my entire wardrobe was in a pile around my feet and I was holding my sobbing face in my hands.

Not a flattering scene.  I never made it to the BBQ. I climbed back into bed and slept all day. I was sicky, but totally didn’t realize it. Anyway.

Trying on a ton of outfits in the morning has never been my routine. I know some women are like that, but I’m not. While I’m showering I usually mentally flip through my drawers and settle on an outfit. 99% of the time it’s the right outfit. It fits. I put it on and I happily go about my day.

I realized that I’m totally the same way about dating, and that I’ve never been into, “trying on,” men. I know what is going to suit me and when I see it, I put it on. I don’t slip into one guy for a minute, take a look at myself in the mirror then toss him into the laundry pile. I usually have that mental image of the, “right,” one and know him when I see him. Obviously sometimes that doesn’t work out, but 99% of the time, it’s right, it fits, and I happily go about my relationship.

One of my girl friends from childhood doesn’t like this one bit. Now that I’m single it’s like she’s in overdrive. She’s always asking, “Did you go on a date? Did you meet anyone? Are you looking online? Are you going to just sit there and be single?” Maybe I am lazy. No, strike that, I am DEFINITELY lazy about dating, but I really don’t feel like standing in a pile of discarded men, sobbing and feeling like I’m losing my grip on reality.

I don’t know what my next guy will look like, but I know he’ll be a perfect fit. That’s enough for me right now. I might go buy a few new dresses in the meantime though because, quite frankly, I have nothing to wear.
Posted by Girlfriend in Progress at 2:09 PM 4 comments:

When I die, if there’s a Hell that's where I'll be going.  I do hope that you have a “sorting” moment at the Pearly Gates before being sent downtown, though, because I have a few things to say to God/Jesus. They are:
Posted by Girlfriend in Progress at 2:29 PM 1 comment:

One of my more embarrassing hobbies is following (OK, obsessing over) famous relationships. Many a conversation has started with me saying, “You’re going to die when you find out who he’s married to…” I know, I know, it’s kind of a waste of time and usually pretty depressing as hobbies go, but it floats my boat to think of celebrities as real people. I WANT them to be real people, and the act of falling in love humanizes them in my eyes. It makes me fantasize about the banalities of their lives (What does Brangelina have for breakfast?) Plus there are so many wack-tacular pairings that make you think. I like when something makes me go, “Hmmm.”
Like the fact that Shmoopy is married to George Stephanopolous. How does that even happen (actually I kind of know how it happened, because Ali Wentworth apparently grew up in Washington DC. So she probably impressed G-Steph with her political prowess. Or he loved In Living Color. What the hell do I know?)
Or Joanna Newsom and Andy Samberg. This one really gets me excited, because Joanna is my patron saint. She comes across as very scholarly and very much an anachronism. There’s a primness about her, and I like to think of her sitting around with Samberg and the Lonely Islands crew while they write modern classics “Dick in a Box.” I wonder if she’s ever picked out the melody for “Mother Lover” on her harp.
See, isn’t this a fun game?

And these are just current couples. Dig into the archives for head-scratchers such as Will Arnett and Penelope Ann Miller. (WHAT? I don’t get it.)
Honorable mention, of course, goes to the crazy awesome couple pictured. I don't know how Nick Offerman and Megan Mullally got together but I'd like to thank THE UNIVERSE for that.
Posted by Girlfriend in Progress at 12:33 PM No comments: 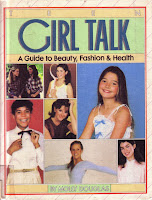 It’s weird what sticks with you. When I was pretty young (say nine or ten-ish) my next door neighbors, who were like surrogate grandparents to us, gave me a book about hygeine, comportment and femininity for girls. Who the heck knows where it came from, because their daughter was already grown and having sons of her own, but it seemed to be some sort of hand-me-down. Teen Girl Talk (the great site awfullibrarybooks.com has a feature on it, here http://awfullibrarybooks.net/?p=7499) was filled with all sorts of frightening tips.  At the time, I remember thinking it was already pretty out-dated*, and I’ve never been the girliest-girl in the world, but for some reason I lived and died by its advice.
I tried the 1000 calorie per day diet plan (great for growing kids!) and did the ankle exercises until they were throbbing (and still chubby.)  I even kept my eyes open when washing my face because, “eyes need washing, too.” But what I remember most is its recommendations on body measurements, and how you should be able to fit your hands around your waist. Is anyone actually able to do this? Make a circle with the fingers of both hands in front of you right now. Does that look like the circumference of a healthy waist? No. Maybe back when whalebones were a popular fashion accessory, but certainly not now. Lord knows I couldn’t do it at age 10 and I couldn’t do it at age 20 when I started working out and dieting like a madwoman. Is that not insane? Even as an adult I catch myself wrapping my fingers around my waist trying to gauge just how long my damn fingers would need to be to reach each other. Even though I know – and knew as a kid – that it’s a completely unrealistic goal.
There’s not much of a point to this, except to say that we spend our adult lives trying to get out from under the negative things we learned and experienced as kids. If I have a female child in the future I’ll make sure to tell her that her waist is great just the way it is and that eyeballs don’t need washing.
*Further research has uncovered that it was published in 1981, but, gosh, it seemed like something from the 30s.
Posted by Girlfriend in Progress at 10:34 AM 1 comment:

I promised to be more cheerful and watching White Christmas always does that for me this time of year. I'm notoriously picky about my Christmas favorites. A Christmas Story? Meh. It's a Wonderful Life? Lies. But I love me some White Christmas.Vera Ellen was my style icon growing up.

Posted by Girlfriend in Progress at 1:04 PM No comments:

A recent comment (from this post) inspired me to talk a little bit about my post-breakup goals:
Anonymous said...
If you get lucky enough to snag another guy, stop acting crazy. Don't do drugs, and give a lot of head. You might want to lose a little weight too. Walking a lot will make the depression go away.
While I know this commenter is just being an total asshole, he/she raises some excellent points. I've been working on getting my head on straight and the best way to do that is to set some goals. Spending more time exercising is one of them. Over the past five years I went from vegan to vegetarian to mostly-vegetarian-plus-some-poultry, and it's amazing how the pounds have added up. Really, they're probably mostly cheese pounds. (I went for SIX YEARS without it!) A daily walk or some yoga/Pilates won't just get me back into my size smalls, but will improve my overall mood. I used to be a fanatic about exercising. It's just a matter of getting back into that mindset.
Another important goal on my list is to get more involved. I'd love to start volunteering on a regular basis and now I have the time to do it. So I'm going to make it a New Year's resolution, and start sending out resumes. I'm super excited about this already!
As for not doing drugs and giving more head...you're an asshole, anonymous commenter, but we've already established that. I would absolutely be "lucky" to "snag" another guy. I'd consider myself exceptionally lucky to find love again, and that guy will be exceptionally lucky, too. If you'd like to stop hiding behind the internet and share some more of your kind advice, feel free to email me at leigh.cummings@gmail.com.
Posted by Girlfriend in Progress at 2:07 PM 5 comments:

This is the first time I’ve ever really lived by myself, which is odd because I’ve always felt like a very independent person. But now I’m realizing that I’m kind of a baby about certain things. In the wee morning hours today, I either woke up and saw a bug on my quilt or DREAMED that I saw a bug on my quilt and shot out of bed like whoa. I spent the next twenty minutes whimpering, shaking my quilt, and wondering if there was ever a bug in the first place. And hating myself for being so easily unsettled. If I had a boyfriend or a roommate, this wouldn’t have even been an issue. When someone else is there, the bugs (real or imagined) are way less intimidating.
It makes me wonder if I’m cut out for this solitary existence. Don’t get me wrong, I love having alone time but not 24/7. I miss being able to turn to someone and say, “Hey, you-know-who’s acting CRAZY again,” or, “A Doctor Who movie!?! I don’t know how I feel about this!” I miss having a constant sounding board, whether romantic or platonic. My girl friends are stepping up to the plate in amazing ways to fill the void but they aren’t physically next to me, sharing a home. There’s just nothing that compares to that.
I’ve always been a nester. I love the idea of creating a safe space with someone and having it be, “us against the world.” I know that one day I will have that again, but its absence today is a bummer. I want someone to come and give me a hug and tell me they’ll keep an eye out for that scary bug, even if it was never really there.
Posted by Girlfriend in Progress at 1:56 PM No comments: